Author Jolie Booth will be selling her first two books from her Saturn Returns series and newly published novel Sisterhood.

In the first book in her Saturn Returns series, The Girl Who’ll Rule The World, Jolie Booth introduced us to Esmeralda, although “introduced” is perhaps too polite and formal a term to apply to a process akin to being sucked into a howling vortex of hedonism, sex, drugs and partying and being shot of out the other end like a cork in a wind tunnel.
In her next book Never Worn, however, Esmeralda is older, though not necessarily
always wiser. Seven years have elapsed, during which time she has undergone experiences as varied as living in a famous (infamous) squat in Berlin, and touring Europe with a troupe of fools and mummers, struggling to make a living in the world of performing arts.
She’s forced to confront many issues in her existence which can no longer be ignored or avoided. Marriage. Commitment. Children. She squares up to these challenges with her customary mix of crashing ahead, impulsively, crashing into hard, emotionally-charged situations, and sometimes, harking back to the old days, even crashing out, in a haze of substances.

Once more, Jolie Booth has created a detailed and believable chronicle of a complicated character who you can’t help but love and feel for, infuriating though she often is. And in her unflinching confrontation of the physical and emotional pain of the difficulties of child-bearing, she has produced some of her finest writing yet. 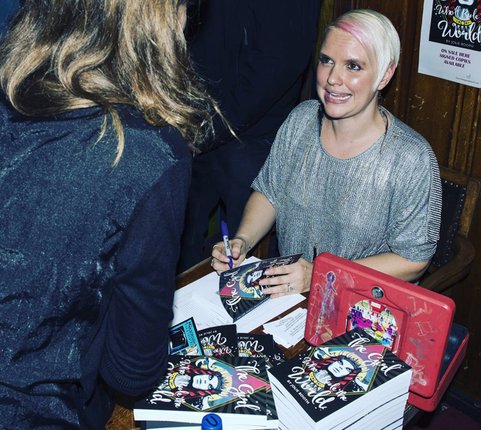